"Boys and girls, follow me, rise, lift, press, leave and right mustangs with manes and white cranes with wings ..." On the afternoon of April 12, more than 20 international students were following the teacher in shadowboxing. 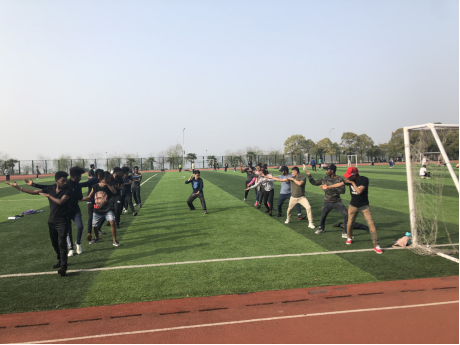 Teacher Wang Deping from the physical education department of the school said that many martial arts moves are first heard by these foreign students, but they all learn them very carefully and each move has its own model.  In class, in addition to the basic moves of Tai chi, teacher Wang also taught international students the "yin and yang method" of Tai chi, emphasizing that Tai chi is a kind of kung fu practiced both inside and outside, which can achieve the effects of strengthening body constitution and cultivating one's morality. Long-term practice is very beneficial to body and mind.

Hero (Chinese name) from Kazakhstan in Class 2 of Grade 17 Business said that he likes sports very much and Chinese kung fu very much. He was very happy when he heard that there will be Tai chi classes this semester.  He said: "The teacher spoke very carefully, and I also like Tai chi.” During the conversation, a few moves of Tai chi were briefly displayed. 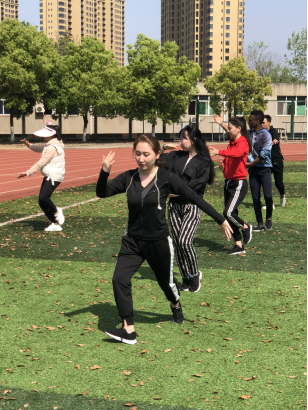 Oumar (Chinese name) from Tajikistan in Class 3 of Grade 17 Business is a senior martial arts enthusiast. He has been studying taekwondo for 3 years and has been a black belt in taekwondo for 3 periods. He has also joined the taekwondo club of the school and goes to the training ground to practice for more than 2 hours every night.  He is very interested in the physical education courses offered by the school. Last semester was table tennis and this semester was Tai chi. He was the first to come to class. Before class, he would learn lessons from his teacher. The physical education teacher also liked him very much and was willing to give him a "small kitchen class".  For the newly-learned Tai chi, Oumeier found it very interesting, especially the teacher's explanation of every move has a special understanding of Chinese culture and full of charm.  It is not only a simple movement of the body, but more important is the inner spiritual smelting, physical and mental unity.  He listened carefully to the theoretical knowledge taught by the teacher in class and explained his understanding to friends in other countries.

As a female student, the monitor of Class 1 of Beibei Business Class 2017 is also very interested in Tai chi. She believes that practicing Tai chi requires a complete relaxation.  Sitting in the classroom every day and keeping a posture all day, the musculoskeletal stiffness, relaxation is the best treatment.  After learning a set of Tai chi, I always play it once every night to relax my whole body and promote sleep.  The teacher said that Tai chi was also closely related to traditional Chinese philosophy, which also impressed her deeply with the concept of harmony between man and nature contained in Tai chi.

Director Liu Xiaolu of the International Cooperation and Exchange Department of the school said that in order to enable international students to know more about Chinese culture, integrate into the learning environment of China more quickly, improve their humanistic quality and increase their knowledge, the school has not only provided basic Chinese language reading, Chinese writing, Chinese culture and other courses, but also provided traditional Chinese culture courses such as Tai chi, table tennis, and tea arts.

It is understood that Wuchang Institute of Technology is the first non-governmental university in Hubei to admit foreign students. At present, it has more than 200 foreign students from more than 20 countries, including Russia, Britain, Belarus, Kazakhstan, Ethiopia, Zimbabwe, Rwanda, South Africa and Thailand, all over Eurasia and Africa, with the "the belt and road initiative" countries accounting for a large proportion of students.